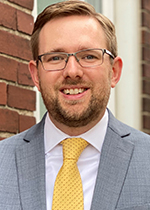 The Clayton Board of Aldermen has appointed David Gipson to serve as City Manager, effective February 3, 2020.

Gipson has substantial experience in public service and professional city management. He served most recently as City Administrator for the City of Wentzville, Missouri since 2016, where he led a full- and part-time staff of nearly 500 employees. Prior to this he served as Assistant City Manager in the City of Richmond Heights and other positions in the City of St. Charles. He earned a Master’s degree in Public Policy Administration at University of Missouri – St. Louis, and a Bachelor of Science degree in Planning from Missouri State University. Mr. Gipson’s prior experience as a professional city planner will be particularly beneficial to the city in regard to redevelopment and the upcoming comprehensive planning process.

"I am honored that the Mayor and Board of Aldermen have entrusted me to serve as Clayton’s next city manager,” incoming City Manager Gipson said. “Clayton is a unique community with engaged residents, flourishing neighborhoods, a thriving business sector and a substantial public sector as the seat of St. Louis County Government. I look forward to joining the community and working with the City’s elected officials, management team and staff to deliver high quality services."

The City initiated a national executive search in mid-2019 to identify the City’s next city manager. After receiving numerous nationwide applications, the Board of Aldermen spent significant time reviewing applications and performing interviews prior to selecting Gipson. As City Manager, he will lead a professional staff of nearly 400 full- and part-time employees, all working to provide world-class public services for Clayton’s 16,000 residents and daytime population of 47,000.

“As a new mayor, I’m looking forward to working with David as our new City Manager,” said Mayor Michelle Harris. “Together with the Board of Aldermen, our outstanding staff and the people of Clayton, David will help lead us into a new decade. With this critical leadership role in place, we can continue the work of creating the community we want for the future.”