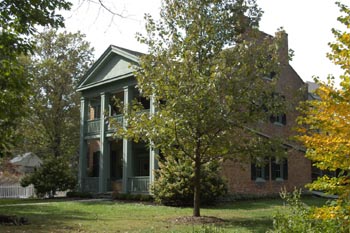 When the City of St. Louis, anxious to separate itself from its countrified cousins, split from St. Louis County in 1876, the county courts "long-housed within city limits" were left without a home. After much consideration, County officials chose a site donated by two native Virginian farmers, Ralph Clayton and Martin Hanley.

Ralph Clayton, born in Virginia in 1788, came west in the 1830s, and eventually settled in the southeastern part of the modern city that bears his name. When the infant St. Louis County needed a new site for its seat, Clayton convinced county officials that this land "a half day's ride from the city" was a superior location than the more remote villages of Kirkwood and Mount Olive which were also under consideration. Clayton agreed to give the land to the County, requiring only that the area surrounding the new courthouse bear his name.

Martin Hanley, another native Virginian, arrived in Missouri in 1834. After establishing himself as a blacksmith and merchant, Hanley built a two-story farmhouse that still stands on the north side of town. To augment Clayton's proposal, Hanley gave a small plot east of Clayton's land. Today, the 104 acres donated by Clayton and Hanley are covered by the City's Central Business District.

On December 4, 1877, County residents voted to adopt Clayton's and Hanley's land as the new County seat; a few months later 3,000 people gathered to see the cornerstone for the new courthouse laid. The building was completed at a cost of about $25,000.

Over the next 25 years, Clayton slowly grew from virgin forests and farmland to a small town. The town had only a few residents, so businesses catered to the courthouse traffic that trickled in from the outlying County.

Clayton's first schoolhouse and local newspaper appeared in the early 1880s; electric trolley service arrived in 1895; a volunteer fire department was organized following the town's first major fire in 1897; and by 1905, electric, water and phone lines were built to meet the needs of the growing area.

A City Unto Its Own

The City of Clayton was formally incorporated in February 1913. Talk of creating an incorporated municipality had circulated among residents for several years, but action was not taken until leaders in neighboring University City planned to annex Clayton. On April 14, 1913 voters approved incorporation, and chose William Broadhead, who built Clayton's first residence in 1880, as the City of Clayton's first mayor.


Earlier in the century, several prominent St. Louisans, who wanted to escape from the crowded city, relocated to Clayton. The resettlement became a trend, and by the 1920s, Clayton was growing at a rapid pace. Between 1920 and 1925, Clayton's population ballooned from around 3,000 residents to more than 7,000; by the end of the decade, the value of Clayton's real estate had tripled.

Clayton suffered with the rest of the country during the Great Depression, but the lack of manufacturing and heavy industry insulated it against the highest rates of poverty and unemployment affecting larger cities. Clayton built its first city hall in 1931 and, because of its progressive leaders, completed several large civic initiatives. Charles Shaw, a banker and real estate developer who served as mayor from 1933 to 1940, initiated Works Progress Administration projects that widened city streets, helped build a Clayton library, and created the public park named in his honor.

By the late 1940s, Clayton was in the midst of a building and business boom that eventually changed the City from a quaint suburb to the hub of the St. Louis metropolitan area. In 1952, the City re-zoned the area that became the Central Business District, allowing larger commercial and retail businesses to expand. By the mid-'50s, city officials realized the government needed restructuring and commissioned a task force to rewrite the city charter to accommodate Clayton's changing concerns and needs. Voters approved the new charter in February 1957; the new system relied on the mayor and six aldermen to handle policy and planning, while administrative duties were given to a city manager hired by the board. 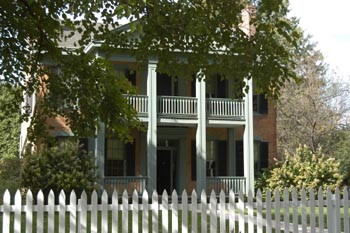 The same year, the City abolished the height requirement on new buildings, and plans for Clayton's first high rises were soon in the works. However, City planners established strict requirements to ensure Clayton streets would not become tunnels amidst corridors of skyscrapers. When Clayton's first office towers opened in the early 1960s, tenants leased all the available space months before the builders finished.

In the decades since, the City of Clayton has continued to grow and prosper. But despite the metropolitan nature of the Central Business District, Clayton maintains a safe, secure residential community. Over 81% of Clayton's real estate is either residential or city park. Martin Hanley's 129-year-old farmhouse still stands on the edge of downtown Clayton, a testament to the city's unique combination of urban flair and quiet community.